There is a new craze of placing QR codes on the roof of your building to be seen by Google Maps. To join in, Facebook decided to launch a project and create their own 42 foot QR code on the roof of one of their buildings. The result can be seen below: 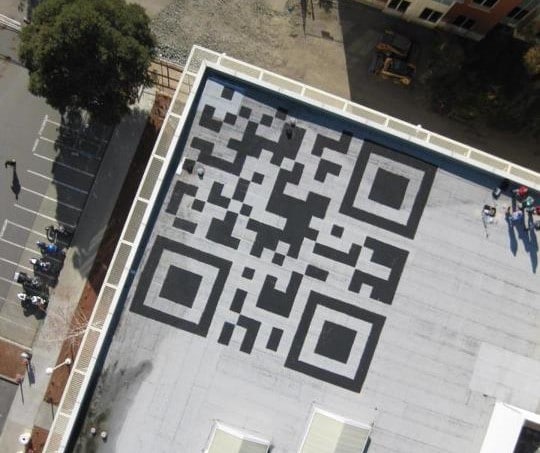 So all in all, what can be learned from this is to always remember to put your 4 pixel white space when you paint a huge QR code on the roof of your building.

It all started with Mark Zuckerburg, CEO of Facebook, announcing a “Space Hackathon”. The idea was to reinvent a space at the Facebook Headquarters. One of Facebook’s employees, Mark Pike, had an idea of putting a QR code on the roof that could be used to RickRoll people with epic proportions. The idea gained a lot of ground and went into planing. Facebook created a short URL for this QR code to allow for a smaller, simpler QR code. Building materials were also looked at and ultimately it was decided to just paint the QR code onto the roof.

At Hackathon 29, Facebook was able to gather up a bunch of engineers, designers and other to go up on the roof and create this QR code. Once finished, they used a camera attached to a remote control helicopter to take a photo of their work.

Read the entire story over on Facebook’s blog for more details to the story.

What Do You Think About This?

Post a comment below and tell us your thoughts on this project. Does it scan using your QR code reader?